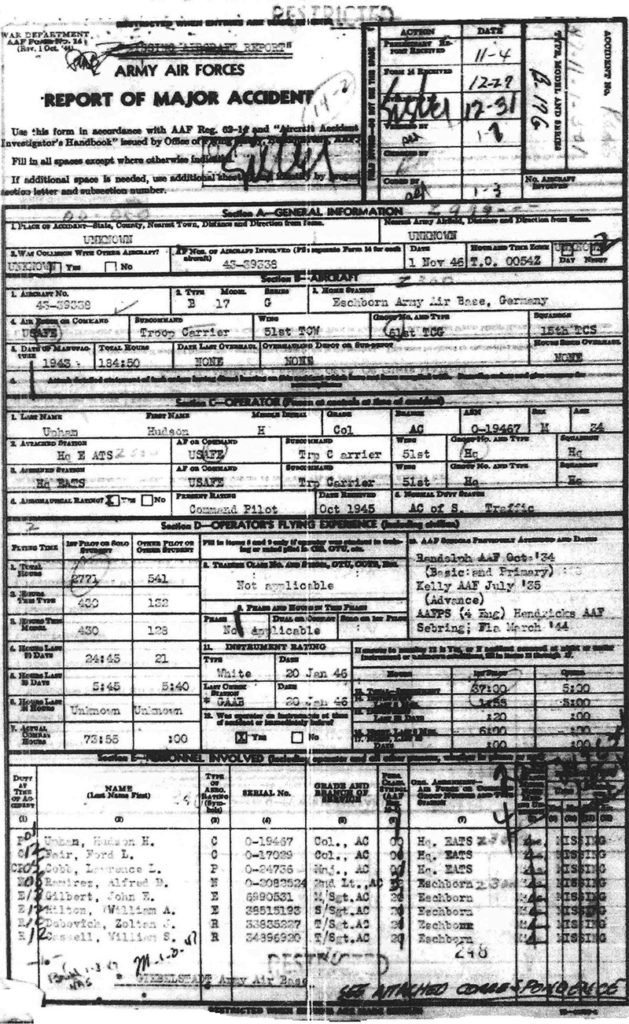 This appointed a six-man Aircraft Accident Investigation Board consisting of:

The investigation conducted by the Board was very thorough. They examined all the available evidence and interviewed witnesses. The Board’s report contained 15 enclosures which included the aircraft Clearance Form (250-ACF_Form23) and Flight Plan (011_Flight_Plan), details and testimony from Capt. Steigner (261-steigner3) and S/Sgt Kable (262_kable) (the Capodichino “weather men”) regarding the meteorological briefings given to the crew for the period 31st October – 1st November 1946, the testimony and interrogation of Lt. Ray Gordon (271-Ray_Gordon) – a passenger going to England, but who decided not to go on the flight that night – plus the complete French Army report of July 1947 concerning the discovery and initial survey of the crash site on Mont Blanc (151-French_Report).

Part of their task was a formal update to the AAF Form 14 (Report of a Major Accident 291-major_accident_report_supplemental), outlining the known circumstances immediately prior to the accident and attempting to draw some conclusions and make recommendations.

The Board’s conclusions were somewhat ambiguous. It was felt that in themselves, the weather conditions over the Tyrrhenian Sea were not believed to be a major contributory factor to the accident, since the worst of the weather was already behind the plane by the time the accident occurred. They did, however, note that accurate “winds aloft” (i.e. wind directions and speeds at various altitudes) data was not available, but were fairly confident that a rising easterly/southeasterly warm front produced by the depression would cause a 10/10 cloud buildup in the Mont Blanc area, giving zero visibility at 12,000 feet. What they could not account for was the massive deviation from the “official” flight plan route. From the point of impact, it was ascertained that the flight direction immediately prior to the crash was approximately 350 degrees (10 degrees left of North). They could only speculate that the pilots might have made a deliberate choice to fly the shorter route, or that they might have been off course due to strong westerly winds coupled with faulty navigation. Curiously, what does not emerge is that a combination of these two factors may be the real cause.

They made two recommendations which were immediately put into force:

The report was endorsed by the Chief of Air Staff, Colonel Alonzo M. Drake himself with a letter dated December 12 1947 (320-Drake_letter) to the Commanding General, United States Air Forces in Europe. Among other things, he indicates that the “corrective action” of the Board’s recommendations has already been implemented, “no investigation for disciplinary action is contemplated”, and that an exhaustive but unsuccessful search for weather data covering the period of the flight has been conducted.